If you are like me behind a Microsoft ISA server proxy on a domain network or any other type of proxy, you will find problems getting the Linux applications Synaptic package manager or apt-get to work.

The best way I came across to solve this issue is to use a software called ntlmaps.

This application is a proxy software that allows you to authenticate via an MS Proxy Server using the proprietary NTLM protocol. This is useful when you start getting error “Error 407 Proxy Authentication Required” which drove me crazy the whole day!

I’m using Ubuntu as my Linux OS. If you were able to make Firefox work so you can go to http://packages.ubuntu.com/ , select your Ubuntu edition , browse all packages and look for ntlmaps, download it and install it.

After that open the file /etc/ntlmaps/server.cfg and make sure you fill the parameters correctly such as the Listening port (The port to use in the proxy) NT_HOSTNAME (Which is the Domain Controller’s computer name on the network) and NT_Domain. 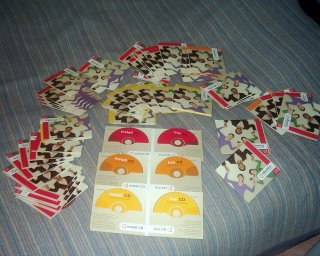 The package came from Holand 🙂

I received it after struggling with the customs department and the supervision department 😕 … and they made me pay ~$60 customs 🙁 .. it’s ok … I’m Happy 😀
So if any body around and want a copy tell me.

I already started giving some copies to my co-workers and relatives:)

If you are moving to Linux or already have Linux and you saw the power of Google Desktop, you’re going to love Beagle. 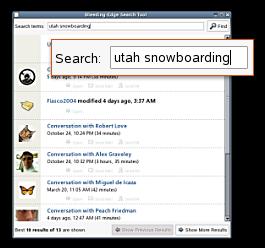 Beagle is a tool for indexing and searching your data. Beagle is improving
rapidly on many fronts, and should work well enough for everyday use.

The Beagle daemon transparently monitors your data and updates the index
to reflect any changes. On an inotify-enabled system, these updates happen
more-or-less in real time. So for example,

* Files are immediately indexed when they are created, are re-indexed
when they are modified, and are dropped from the index upon
deletion.
* E-mails are indexed upon arrival.

* IM conversations are indexed as you chat, a line at a time.
Have a nice day,
Hasan Bazerbashi

The winners of each of the three races will win an Xbox 360. In addition, contestants using Grasshopper will also qualify to win an Xbox 360 game of their choice. Limit one Xbox 360 and one game per participant.

The Code Project will identify the first of three ASP.NET applications to be ported so that it runs on Linux.

In each race, the first applicant to submit the ported application so that it runs successfully on Linux, and meets all race requirements, wins.

It was my dream to run .Net application on almost any Operating System (Cross Platform), so now I have the tools to easily do it, and the best of all – I might get xBox 360!

As I reviewed the options I can give you a tips to choose your way of doing the contest:

It looks like the easiest way to do it is to use Grasshopper the free Visual Studio plug in which enables you to compile you current ASP.Net to Java byte code thus works in any Java environment.
Note that Grasshopper is only for Web Applications.

If you currently work on Linux, then get Mono. No need for loans to buy Windows 😛
And with Mono you can do Desktop applications also, not just Web Applications as it is with Grosshopper.

If you are PHP guru, you have to look for ASP.Net application and just do the exact same look and functionality of that ASP.Net application. I think this tough, because you will completely rewrite the whole thing (re-invent the wheel).
And as the case in PHP, you can do with ColdFusion from Macromedia.

So choose what is the best for you, and good luck!

The distro is called “Arabian Linux” and it is still beta.

I’m not gonna quote from thier web site, visit them here : http://www.arabian.arabicos.com/

I’m happy to see this 🙂
I will try to help them as much as I can, I hope you will too 😉
Tell your friends about it and let’s get it started 🙂

“Ubuntu” is an ancient African word, meaning “humanity to others”. Ubuntu also means “I am what I am because of who we all are”. The Ubuntu Linux distribution brings the spirit of Ubuntu to the software world.

Ubuntu is a complete Linux-based operating system, freely available with both community and professional support.

Also Ubuntu is Open Source Operating System, which means you can see how your system is built and coded for free!

The result of my experiance with Ubuntu Linux till now is amaizing!

I’m telling you, this new version of Linux is so user friendly and powerfull.

Fast, Easy Install:
Ubuntu doesn’t have a pretty graphical installer, it has a FAST and EASY installer. OK, there are still a couple of places where you need to know what you are doing, but the defaults will work for most people.

Immediately Useful
When you finish your Ubuntu installation your system is immediately usable. You have a full set of business productivity applications, internet applications, drawing and graphics applications, and games. That one CD gives you a very good desktop environment out of the box, with many applications for business, home and personal computer users installed by default. There are thousands of additional pieces of software that are just a few clicks away, but we’ve done the hard work to get the basics in place easily and effectively.

If you like, you can install this Linux and Windows together very easily. All you have to do is just to delete a partition that you don’t need (Bigger than 7 Gig is recommended) and just reboot with Ubuntu install CD and when it asks you where to install Ubuntu choose “Largest continuest free space” and it will do the rest 🙂
So after the installation is done and you restart, you can choose to boot to Windows or Ubuntu Linux.

This version of Linux is so nice and supports a very big number of Hardware (Wireless, RAID …etc) …. I didn’t need to install driver for any Hardware – everything were ready to use 🙂
Also it has the interface in so many languages (Including Arabic!!) … you can read/write in these languages just normally.

Linux is becoming more and more powerfull. And now I always use it instead of Windows 🙂 I highly recommend this Version.

And if you are a .Net developer like me 🙂 … you can develope .Net applications on Linux !! can it get any better !! 😀
Check here for .Net on Linux: www.go-mono.com

Linux Ubuntu can run on any computer system, even Apple computers!

I really love this Ubuntu Linux and you just gotta try it.

For more info and download : Ubuntu – Linux for Human Beings
The CD is about 600MB 🙂

If you have any questions please ask 🙂