We are becoming very dependent on our mobile devices. They are being used on a daily basis for communications, getting tasks done and even for entertainment.

Google has a nice video here to give you an insight of how important the mobile devices are becoming.

Mobile devices comes in many different shapes and styles, but I think what is more important than the hardware is its operating system.

Dead! I have used Symbian ever since I got my first mobile. They were the best back then and until just recently. But Nokia had to make a change and now they are tied with Windows Phone 7.

Pretty much a copy cat! Maybe this is a bit harsh, but this what I really think. Of course I mean copying iOS. Same grid of icons style and many other things. The only cool thing I see about Android is how easy it is to customize everything. Heck, I can even replace the SMS app! Which personally never thought of it before. At the end I feel it is clunky and more geek oriented. Not very much for the normal user. Many analysis companies predicting its dominance in the future. In my opinion that is because it is free. Free for the hardware companies to install it on their devices. Which make them able of shipping many kinds of hardware with Android system. Still, I don’t like the user experience with it.

As for developing for Android you use sort of Java. Probably will use Eclipse or what ever IDE you like.

Coming from .NET development, I didn’t like it! The IDE compared to Visual Studio is just lame.

I was so excited when I heard Microsoft are working on a new version of their mobile system which will be done from scratch. And I think they delivered. They came out with a unique design and user experience. They didn’t just imitate other operating systems! You really feel that they had researchers who worked to study each aspect of it. For example, you can see here how they had a team to research the best way to make a virtual on screen keyboard.

Windows Phone 7 now is still a version 1 which means it still lacks some stuff and behind more mature operating systems such as Android and iOS. Also seems to have restrictions on developers more than what iOS had when it was out.

As Microsoft promised in Mix 11 event, all of these issues will be address with Mango update which is probably coming out on September 2011.

As for developing for Windows Phone 7, Microsoft got the best tools for it, and they are free!

Microsoft is mainly a software company, so I think they got the best developing tools.

Windows Phone 7 has a bright future in my opinion.

I think Apple are truly innovators. They ask for premium prices, but in exchange they give you delicious hardware and great user experience.

I remember the day I received my AMD Athlon 64 PC, I was ecstatic! Taking photos of it from the inside and outside. Man I was so proud of it.

My hope was to make it able to run Windows 7 and let me do my Development job smoothly and let my dear wife enjoy some games on it (The Sims 3 🙂 ).

Windows 7 min RAM requirements is around 1 GB. RAM Upgrade is a must. I wasn’t sure what type of RAM I should get, so I was glad to get help from Crucial System Scanner Tool to detect my motherboard model and suggest the correct memory upgrade. So I went ahead and got extra 2 GB RAM to have a total of 2.5 GB of RAM (Yummy!). Costed around $75.

I know my graphics card is probably old for Windows 7, but I wanted to try and see if it could work.

The installation was a breeze. The system rebooted and everything was working. Sound, Graphics..etc. Yuppie! Wait a minute, the graphics doesn’t look clear and my external Wifi USB is not working too. Ugh. Windows 7 Aero effect isn’t working. Went to nVidia web site and downloaded the driver, also visited Linksys site to download the driver for the external WiFi USB WUSBF54g. I found a good advice on the net that I could just use WiFi driver files instead of installing Linksys application which wasn’t compatible with Windows 7.

After installing the drivers my WLAN was working and also Windows 7 Aero effect worked! Everything is working.

I installed the new Visual Studio 2010 and then the Windows Phone 7 development tools to see how things are working. The application was launched quickly, actually any application launches quickly, but moving the windows around is so annoying, slow and jumpy. So my RAM wasn’t enough? I checked the RAM and %20 only was used. It is now obvious that this is because of my graphic card.

My graphic card should be put to rest. Its fan was noisy anyway.

The hunt for a new graphic card started, and with it I remembered the exciting feeling I used to have looking for a good kind of RAM, graphic cards and other computer components.

The max my motherboard can handle is AGP 8x, so after researching I chose my new graphic card MSI NX6200AX 256MB DDR2 which can also run The Sims 3 😛 . Costed me around $37.

I remember I talked about this before, when I said that you will be able to store Data in the Air!! 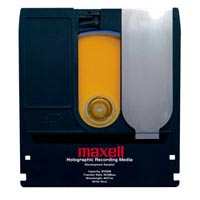 Maxell Corporation of America, has said it will launch its first holographic storage products in September 2006. The first drive will have a capacity of 300GB and a throughput of 160Mbps.

Maxell says the technology designed by InPhase Technologies is capable of achieving 1.6TB per disk with a 120MBps bandwidth.

The disc, which would be around 13cm in diameter and a little wider than conventional DVD promises to hold more than six times the maximum content promised from Sony and Toshiba for their next generation formats.

Holographic storage works by storing information using light-sensitive crystals. Because it uses the whole volume of the disk, not just the surface, it’s possible to store much more information than is possible on a DVD.

InPhase Technologies says that holography enables million bits of data to be written and read in parallel with a single flash of light – making transfer rates considerably higher than those of current optical storage devices.

Holographic data storage is superior to existing disc and hard drive technologies, and is also competitive against tape technologies in capacities and transfer rate. In addition, it offers a 50+ year media archive life and random data access. Finally, the media is expected to have the lowest cost per gigabyte of any commercial quality removable storage.

I can’t wait until I have my TB disks 🙂

I was looking here and there, and I stumpled into a web site that shows a guy (or a gilr I dunno :P) who’s computer uptime (Uptime – the time since last reboot) is 5 years 228 days 13 hours 06 minutes 45 seconds!! Oh my God! 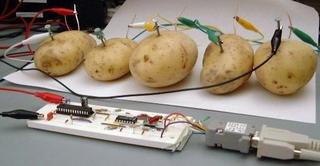 And this project looks really intresting.

This alternative power project is a Linux Operating System with a simple web server powered from 5 potatos.

Potatos are changed every 5 days or so to keep the power on and stable. 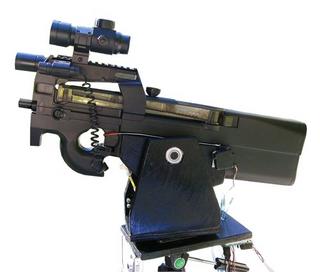 Quoting from the creators’ web site:

The idea of this project was to create a fully-automated sentry gun, capable of picking out a human target and accurately tracking and shooting him or her in the heart. 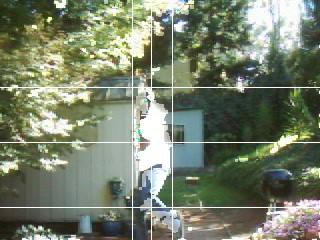 This invention looks so cool and I loved it at the first sight, but,Oh my god! Where is the humanity going to?

They used Microsoft’s DirectShow technology and OpenCV library to read the pixels and translate them into targets and command the motors to move and shoot.

For more info, a look at their web site: http://cs-people.bu.edu/aaron/turret/turret.htm