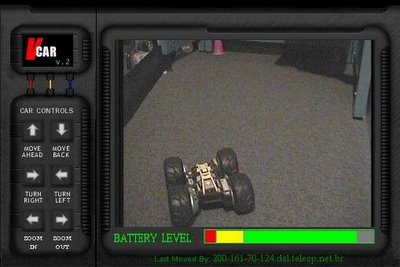 The admin of this project says it was online since 7 years! So maybe some of you might find this pretty old news, but I thought some people like me doesn’t know about it 🙂

It was fun, and I played with it for about 10 min 😛 It really works.
I got you a close up on the car in the picture 🙂

Quoting from the author:

The car is a Tyco Super Rebound (circa 00-01) . Video is
provided by a JVC SVHS Camcorder and captured via a BrookTree 848 svideo refrence/eval card. It is all run on an old Linux box. Vcar is currently located in the office of my employer Trusonic Inc in San Diego, CA.

Check the battery level before you say it is not working 😉 … and if it was away that means the man is charging the car. Have fun.

Play with it here.

The winners of each of the three races will win an Xbox 360. In addition, contestants using Grasshopper will also qualify to win an Xbox 360 game of their choice. Limit one Xbox 360 and one game per participant.

The Code Project will identify the first of three ASP.NET applications to be ported so that it runs on Linux.

In each race, the first applicant to submit the ported application so that it runs successfully on Linux, and meets all race requirements, wins.

It was my dream to run .Net application on almost any Operating System (Cross Platform), so now I have the tools to easily do it, and the best of all – I might get xBox 360!

As I reviewed the options I can give you a tips to choose your way of doing the contest:

It looks like the easiest way to do it is to use Grasshopper the free Visual Studio plug in which enables you to compile you current ASP.Net to Java byte code thus works in any Java environment.
Note that Grasshopper is only for Web Applications.

If you currently work on Linux, then get Mono. No need for loans to buy Windows 😛
And with Mono you can do Desktop applications also, not just Web Applications as it is with Grosshopper.

If you are PHP guru, you have to look for ASP.Net application and just do the exact same look and functionality of that ASP.Net application. I think this tough, because you will completely rewrite the whole thing (re-invent the wheel).
And as the case in PHP, you can do with ColdFusion from Macromedia.

So choose what is the best for you, and good luck!

If you like, you can for example link the image to Wikipedia’s description of Syria: http://en.wikipedia.org/wiki/Syria

And this is the Syria button:

Please save the image on your hosting any where, because it saves me bandwidth.

Now days you hear about so many types of Electronic music such as Trance, Techno, Jungle, Hardcore, and also many sub types like Acid Trance, and Stupid Trance! … etc.

This is really intresting new tool for web surfing …. I think it makes web surfing much more fun. I love it.

Basiclly it brings to you web sites that you like!

I’m gonna copy about it, so look here to learn more about it: http://www.stumbleupon.com/about.html

I’m telling it is so nice …. and very small download size… also availble for all systems.